Those Shrimp and Spinach Enchiladas were so good last week that I decided to continue with the Mexican food theme and make this Pork Chile Verde that's been lurking in my recipe files.

There's nothing better than a good, savory chile verde and this is one of the best I've ever had! 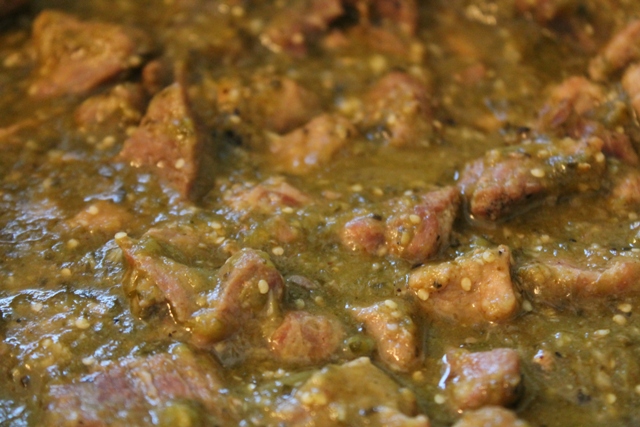 I learn something from every recipe I try, which is one of the fun parts of cooking (besides eating it, of course).  This one taught me that if you need 3 pounds of cubed pork shoulder, to make sure you get a boneless piece of pork.

I went to the store to pick up the ingredients for this recipe and found a bone-in pork arm roast for less than half-price and thought, "aren't I smart and thrifty....I'll get this one."  Wrong, wrong, wrong.

While prepping for the recipe, I discovered that the pork roast had a layer of skin (ewww) that had to be cut off with great difficulty and that the usable pieces of meat had to be excavated from around the bone (ewww again).

At the beginning I promised the little pig that I would use every bit of him to celebrate his life.  By the end, I was wrestling Mr. Piggy to get any meat at all and was seriously considering vegetarianism.

Again, please consider a boneless piece of meat for this wonderful dish. 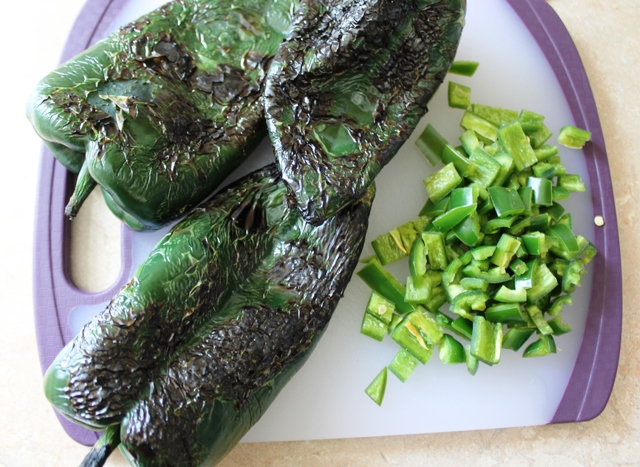 I've been wanting to try this technique for roasting the poblanos - you lay the poblano on the grates of your gas stove with the flame on medium to medium-low and turn it slowly as it blackens a bit.  If you don't have a gas stove, just roast under the broiler as instructed for the tomatillos.

I enjoyed the stove-top roasting, but will remember next time to remove the stems as they, ahem, tend to catch on fire.  Bret wasn't home and I had time to air out the house so the fire department wouldn't be called.  This is why our smoke detector is nowhere near the kitchen.

It sounds complicated, but if you don't have a pig fight the recipe comes together quite nicely and quickly.  You do need to simmer it on very low for 2 ½ to 3 hours and the end result is well worth the wait.  The sauce is so incredibly flavorful and spicy, and the pork practically melts in your mouth. It's terrific. 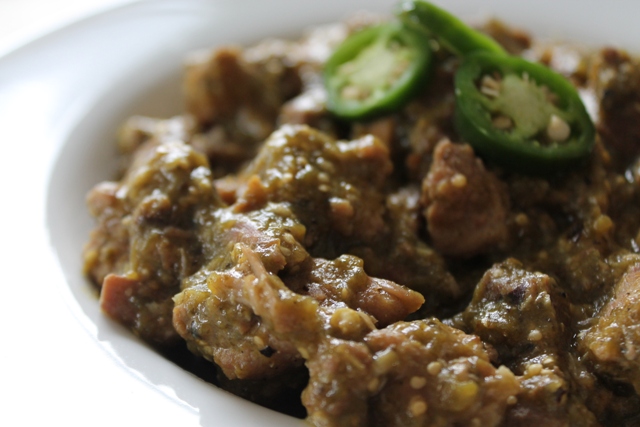 Next time I'll add broth to make more of that wonderful verde sauce.  We usually roll the Pork Chile Verde in fresh, warm tortillas, but you can also have it in a bowl like a stew.

I can see making enchiladas out of this also and even using chicken or beef stew meat.

I'll definitely be making this one again, sans the pig with bone!

This came out nice and spicy, but not intolerable - just a good kick.  Adjust the amount jalapeno if you prefer less heat.

You can leave out the cilantro if you hate it.

I found that it needed a bit of salt after cooked.

I warmed flour tortillas, lightly covered them with about  2 tsp. of sour cream, ladled the stew onto them and wrapped.  They were simple and delicious.

You probably know about the warning not to stick your fingers in your eyes after handling the peppers - or else wear rubber gloves.

You can chop up a small onion and add to the garlic/onion powder saute step if you'd like.  Just saute the onions a few minutes before adding the garlic so it won't burn.

Next time I'll add another cup of chicken stock so there will be more of that wonderful sauce.