The Cake Slice Bakers are continuing in the cake cookbook The Perfect Cake and this month I chose to bake the Boston Cream Cupcakes.

I've never made a Boston Cream anything and have always thought it was a strange combination (cake, cream, chocolate), but if you think about it - it's pretty much an eclair with cake instead of pat a choux. 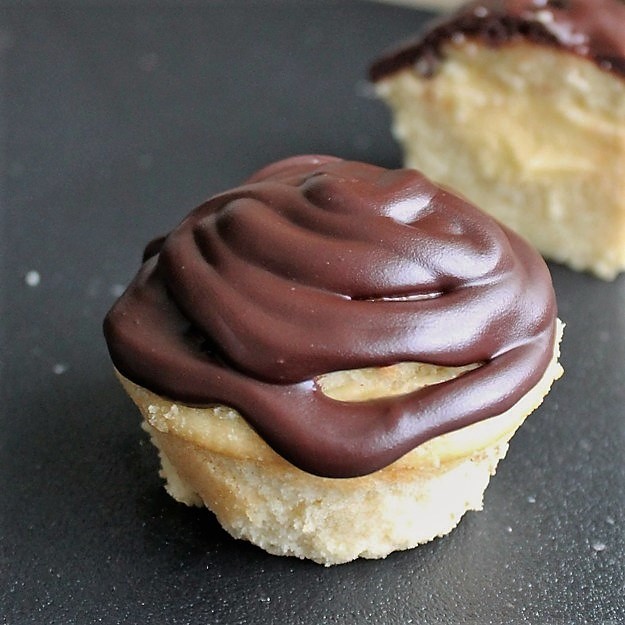 I dove into the recipe with gusto and only had a couple of glitches. Mainly the baker behind the stove problems, though.

I had to make the pastry cream twice. It's finicky about stirring it constantly and not for very long before it thickens (mine took only about 45 seconds stirring it after the cream was added to the egg mixture - the recipe said 1-2 minutes).

The cupcake part, though, was easy to put together and was a delicious vanilla cake recipe. 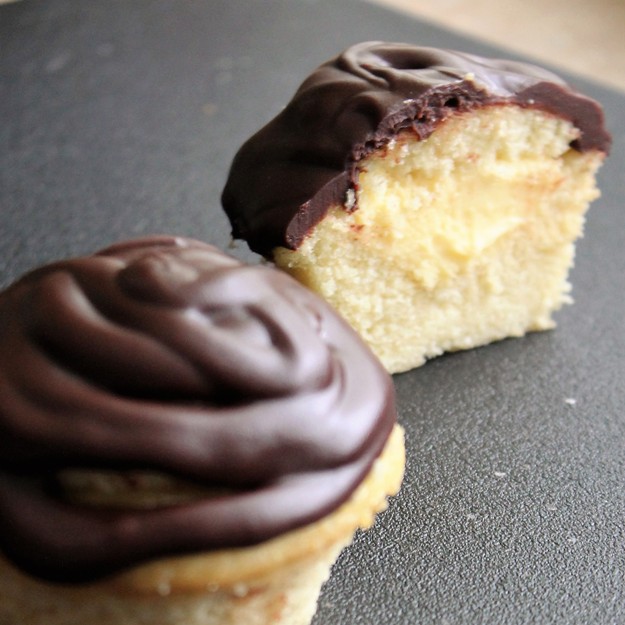 I usually make ganache by pouring the chocolate into a bowl, then heating the cream and pouring it over the chocolate, stirring until blended and shiny.

This ATK recipe has you put all the ingredients (cream, light corn syrup, chocolate and vanilla) into a small pan and stir continuously until smooth and shiny and it worked fine. I love the way the chocolate came out.

Next time I will change two things about this recipe assembly: 1) use cupcake liners since mine stuck to the pan a bit; and 2) instead of cutting the top off, putting in the cream, then putting the top back on before glazing, I'll fill them from the bottom or cut the cupcake in half horizontally, put the cream between layers and then glaze. Not as easy to eat, but easier to put together.

Even with the little glitches, the cupcakes tasted great!

These Boston Cream Cupcakes are tender with a great filling and luscious chocolate icing and would be a great treat for family or friends.

I wrote the instructions pretty much like ATK has them. Next time, though, I would fill the cupcakes from the bottom - it was quite messy and squirty their way.

Store in a sealed container in the refrigerator if you have leftovers. Bring them to room temperature before serving.