Well, I think the name says it all – bacon, cheese, potato – you really can’t go wrong with this Potato Soup with Bacon and Cheese!

For a long time, I’ve looked for THE potato soup and this may be it. Creamy, but full of chunky potatoes, cheese and bits of bacon thrown in there to kick it over the top. (I had a cat and dog ready to step in and help during the cooking bacon part.) 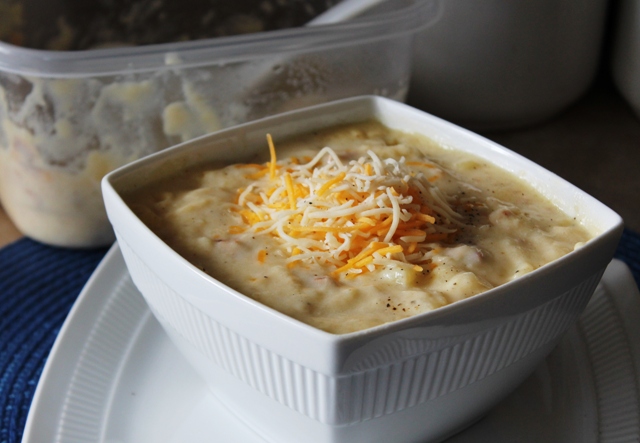 This particular batch didn’t have the onions in it (because you-know-who can’t eat them), but it’s really much better with them.

Also, the green onions mentioned in the recipe would be very good sprinkled on top with a bit more cheese and maybe some more bacon.

Here’s a closeup so you can see the chunks of potato, creamy soup and bacon. 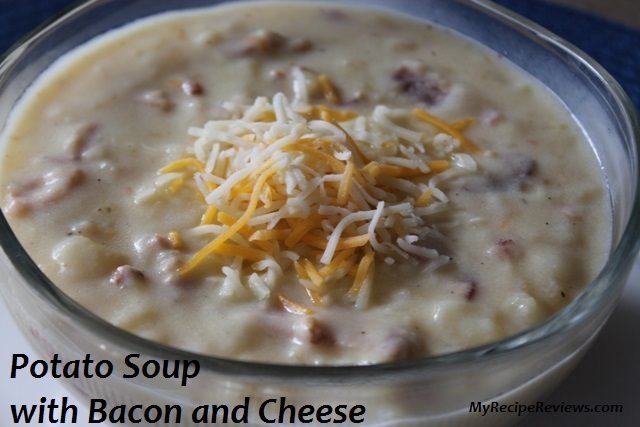 Hopefully it will be getting cooler here soon so we can enjoy this hearty soup. Being in the seventies in the middle of December just doesn’t seem right. I know it’s Texas, but we could really use just a bit cooler weather to get us into the winter mood.

Potato Soup with Bacon and Cheese will be good any time of the year, though, so I hope you try it and enjoy it!

If you prefer creamy potato soup, go ahead and mash all of the cooked potatoes before adding to the broth.

I used a cheddar/jack blend for the cheese, but you could use all cheddar or whatever you prefer, as long as it melts smoothly.  Don't worry if it doesn't melt completely when you add it to the broth - it will blend in later.

I used russet potatoes (5-6) the first time I made this and then small yellow potatoes (about 8) the second time - both were equally good.

After refrigerated, you may want to thin it out with a bit of half-and-half while warming so it won't be too thick.