The September Daring Bakers’ challenge was brought to us by Lucie from ChezLucie. She challenged us to make a true Czech treat –Kolaches!

I'm used to the kolaches down in West, Texas, which has a big Czech population, and they are terrific. The recipe I chose is called Prague Kolach (or Prazsky Kolac - I don't have the appropriate Czech keyboard, so you can't see all the language marks).

The closest thing I can compare it to is a giant coffee-cake-like creme puff, but the cake part has a little more texture and is more bread-like. I know, terrible description, but here's a picture of it to clarify: 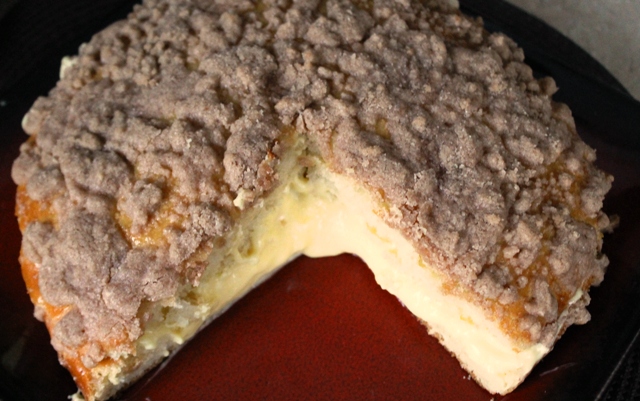 We ate a piece immediately after it was put together because I was thinking the bottom layer of bread might get soggy. I'll update this tomorrow after it sits in the refrigerator overnight and let you know if it does. (Update: I think it was better after refrigerated overnight. No soggy bottom, either!)

I thought this was good, but wished I had a cup of coffee with it (no caffeine after 3 p.m.). The middle was creamy and delicious - it has a stick of butter in it, so it should be! I also liked the texture of the bread and the crunchy cinnamon streusel on top. 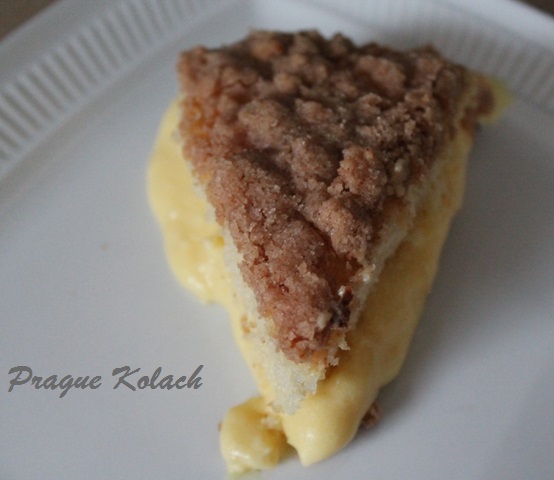 Bret thought it was OK, but lacking something. I thought it was pretty good, but I'd worked all afternoon on it and dadgummit if I wasn't going to like it after all that. Every utensil in my kitchen is in the sink right now - not the fault of the recipe, but of the cook!

This was a very challenging recipe and I learned new things as I went, which is why I like participating in The Daring Kitchen's baking challenges!

This was translated and I typed up the U.S. measurements to make it more clear.

For the vanilla sugar, I just mixed about ½ tsp. of vanilla in with the sugar before adding it.

The dough will be sticky right out of the mixer.

The original recipe called for 320 degrees, but I don't have that mark, so changed it to 325.

I think if I made it again, I will use less streusel - maybe half the amount.  It seemed to overwhelm the delicacy of the bread and cream.