There are a few recipes that are very special to us and this is one of them.

Bret’s mom (Ma) used to make this special (and very time-consuming) Incredible Empire Torte.  At eight-layers, it’s not only beautiful, but is also one of the best cakes I’ve ever had! 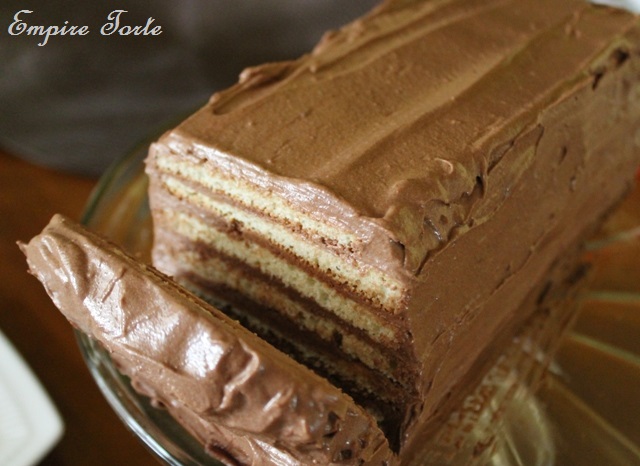 Ma retired from making these shortly after Bret and I were married and passed the torch on to me. One of my best memories was the Saturday spent at her house, carefully taking notes while she taught me every step of how to make it correctly. She’s a precious woman.

The instructions are very detailed, but when followed correctly produce a lovely cake, or torte, with a mouth-watering frosting.

To begin with, you bake the dense, rough-crumbed cake on two cookie sheets and after cooled, cut it into eight similar rectangles. I say similar, because it’s challenging to get them perfectly the same.

I use a ruler and sometimes end up with a few small pieces left over.  Here’s what one of the sheets looked like after cooled, still in the aluminum foil form and then after they were cut: 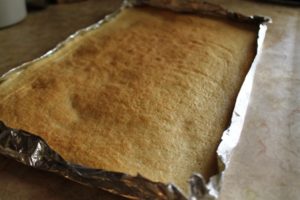 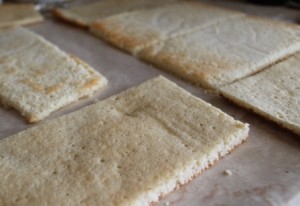 One-by-one they’re carefully stacked with that incredible frosting between each layer, then the final coating slathered all around the sides and tops of the cake. It’s a fight to see who gets to lick the frosting bowl, beater, spoon and whatever else it lands on.

Then, the final product. After being refrigerated for a couple of hours, which is necessary but tries your tastebuds’s patience, the cake is cut (again, another fight – this one for the end piece because it has the most frosting) and enjoyed with a tall glass of cold milk.

The Incredible Empire Torte has no fat in it, so it comes out very textured, but a perfect combination with the creamy frosting. 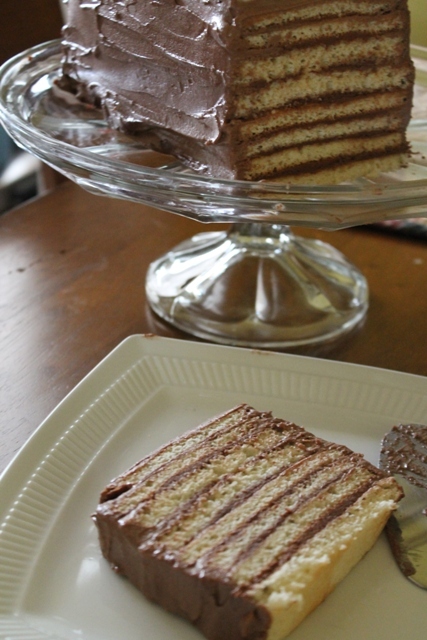 A little tip:  Sometimes if I don’t have the time to make the intricate vanilla cake part, I cheat a little and use a vanilla cake mix.  The cake turns out a little spongier, but almost as good (and it saves a TON of time).

Make sure you have no distractions while making this cake, and put aside a whole afternoon in which to do it.  Trust me. Read the recipe thoroughly and have ingredients on the counter when you begin.

When you start cutting the baked cake rectangles out of the aluminum foil, start with the pieces that may have browned and become crunchy on the ends. After you cut that off, use that rectangle to measure the rest. My last ones ended up about 8x4".

The frosting will take 20-30 minutes to thicken up using a stand mixer - don't be tempted to add more powdered sugar.  It won't be real thick like other cake frosting because it is so buttery and silky.  You'll see...