Where did Hot Cross Buns come from anyway? Apparently a 12th century monk got creative one Good Friday and added a cross to the buns he was baking. It kind of caught on and Hot Cross Buns became a tradition all over the world.

I hope the monk got a promotion, although I'm guessing that by now he's in Heaven and that's quite a bit better than a promotion. Anyway, kudos to the monk and I'm glad he created these delicious Hot Cross Buns. 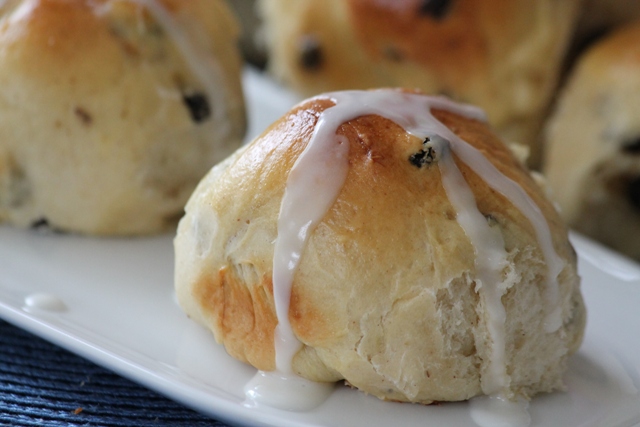 You can use currants, raisins or even dried cranberries for the added fruit, although the currants are superior because they're small and are just tangy enough for the barely sweet buns. These little yeast buns came out so soft and fluffy and delicious.

I had the piping for the crosses a little too thin and ended up glazing the entire tops of the rolls, but I think that may have made them even better!

This was the very first time I'd ever eaten Hot Cross Buns and I really enjoyed them. I warmed one up with a little pat of butter and it was just wonderful. I can't wait till breakfast to have another one with morning coffee!

Since this recipe makes 12 buns, I'll freeze some of them. I think they'll be just as good thawed and warmed up.

I highly recommend making these for your Easter morning breakfast or brunch.

I ended up using about 3 ¾ cups of flour to get the ball to form in the mixer.

If kneading by hand, knead for 8-12 minutes until you get a translucent window pane when stretching a small piece.

When adding the currants, make sure they're patted dry so it won't make the dough sticky. To add the currants, add a couple of tablespoons at a time and fold in so that they're dispersed evenly through the dough.

Make sure the 9x13" pan is buttered very generously so the buns won't stick. If they do stick a little, just gently ply them up with a flexible spatula.