Since you can find most recipes online anymore, I've discontinued all cooking magazines.  There are tons of good (and a few strange) recipes online and it's hard to justify paying for a magazine!

I've always had good luck with Rachael Ray's recipes and the November issue of one of her magazines  has this Short-Rib Ragu with Bacon and Spinach that sounds wonderful.

I made a special trip to the store to get some of the ingredients that weren't already in the cabinet or fridge and decided to make it for dinner last night. Bret is doing some icky plumbing in the house, so I thought a nice dinner was in order to make his day a little better.

If you can find boneless short-ribs at your local store, lucky you. I went to two stores and only found short-ribs with the bone in. I got those and "de-boned" them (not fun) for the dish. Also picked up spinach instead of the kale the recipe called for. Sorry, kale and I aren't friends.

Here's the wonderful ragu simmering in the pot before the addition of the gnocchi: 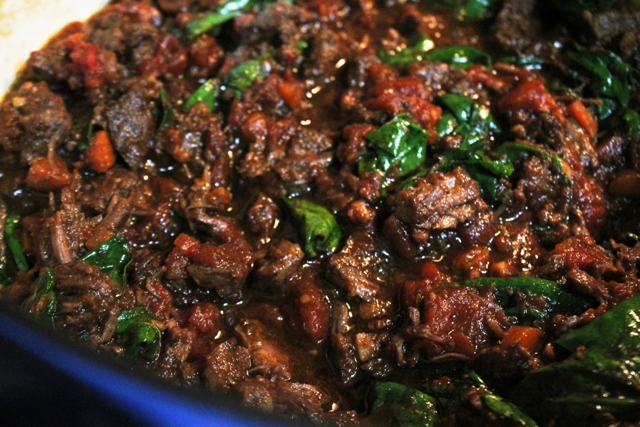 It's as good as it looks. With the addition of the red wine, it has an earthy flavor and hearty texture.

The only thing I might change next time is to use a twisted pasta, like fusilli or rotini. The gnocchi is fine, but I think the pasta will gather more of that sauce onto the pasta. 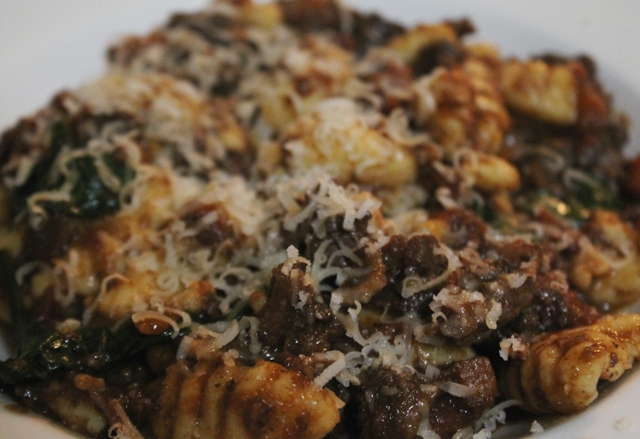 I always line up ingredients to a recipe on the counter to be prepared. This time I didn't chop the carrot, bacon, and garlic ahead of time.  I found myself scrambling while the meat was browning and ended up dumping the beef stock all over the counter and floor (which our dog, Vickie, appreciated).

You may want to prep everything, including opening the tomatoes, measuring out the beef stock, etc., for this one. It's not difficult to make, but the steps are specific.

If you're looking for a cool-weather warming and filling entree, Short-Rib Ragu with Bacon and Spinach is the one to make. In the magazine it's touted at $2.92 per person, but I upped the ribs to 2 lb. since I had to de-bone them, and mine adds up to a little more than that.

Bret had a second serving and gave it the thumbs up and I really liked it as well, so this will go into the "make again" file!

Next time besides using twisted pasta, I would add either a tablespoon of ketchup or tomato paste. It would give it a little more of a bite.

I added the red pepper, as I like things a bit spicy. Not mandatory.

As usual, for my husbands' sake, I didn't use onion (substituted 1 tsp. onion powder), but I left it in the recipe, as I think it would be better with it.

Read the recipe through before starting, and have all ingredients prepared and ready to go!