Every time I participate in a Daring Baker's challenge, I think "this makes my brain hurt...I won't do this again." Then the next challenge comes around and I dig into the recipe and plan my attack.

You'll recognize the Esterhazy Torte when you see the famous chocolate web on top. It's origins go back to Budapest in the 19th century when a clever baker named it for a prince named Esterhazy.

I think the baker had an abundance of nuts and was just looking for something to do with them. This recipe has a ton of nuts in it. 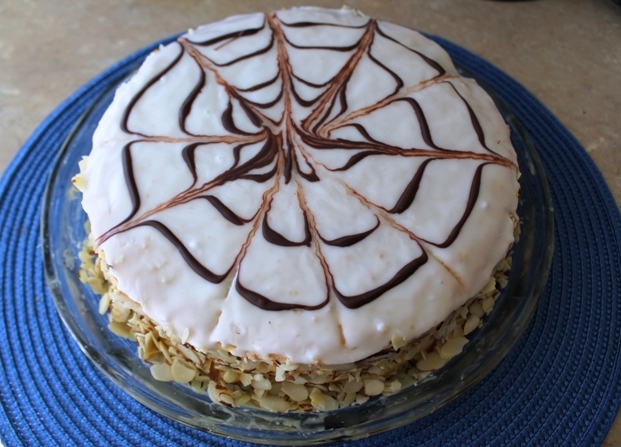 I'm showing you the results instead of the steps because it's very involved. If you'd like to try to bake it, you can find the recipe and fantastic in depth steps at A Kingdom for a Cake.

First of all, I made this one with almonds instead of hazelnuts because hazelnuts and I don't have a good relationship. Enough said. The almonds worked nicely, although I do think it would probably be better with the roasted hazelnuts if you like that flavor.

I was baking along swimmingly (made the five sponge (i.e., cake) layers and the cream filling) and layered the cake. Then the last two steps ate my lunch. You have to make the white icing just so or it will be too thick and not shine, or it will be to thin and turn the cake into a soupy mess. At the same time you prepare the chocolate for the web because the white icing will harden and you can't draw those cute lines across the top.

OK - got through that part (with icing in my hair and chocolate on other various body parts). I had previously refrigerated it for an hour so the filling would harden and the cake would settle in. There's some cream filling you leave out in order to seal up the sides and put the leftover nuts around the sides of the cake.

I figure I'll refrigerate that too and do the side nuts when it comes out of the refrigerator. Wrong! It hardened up like butter (of which it has plenty) and I had to melt it a little to get it to spread. THEN, it was too thin and I had to layer it on while trying to get the nuts to stick. Aye, yi, yi.

I'm showing you the good photos - the back side isn't quite so pretty. It had to be refrigerated for 24 hours before tasting and it was actually pretty good. I left the nuts out of the cream filling and it would probably be better with them - it ended up a little too buttery. 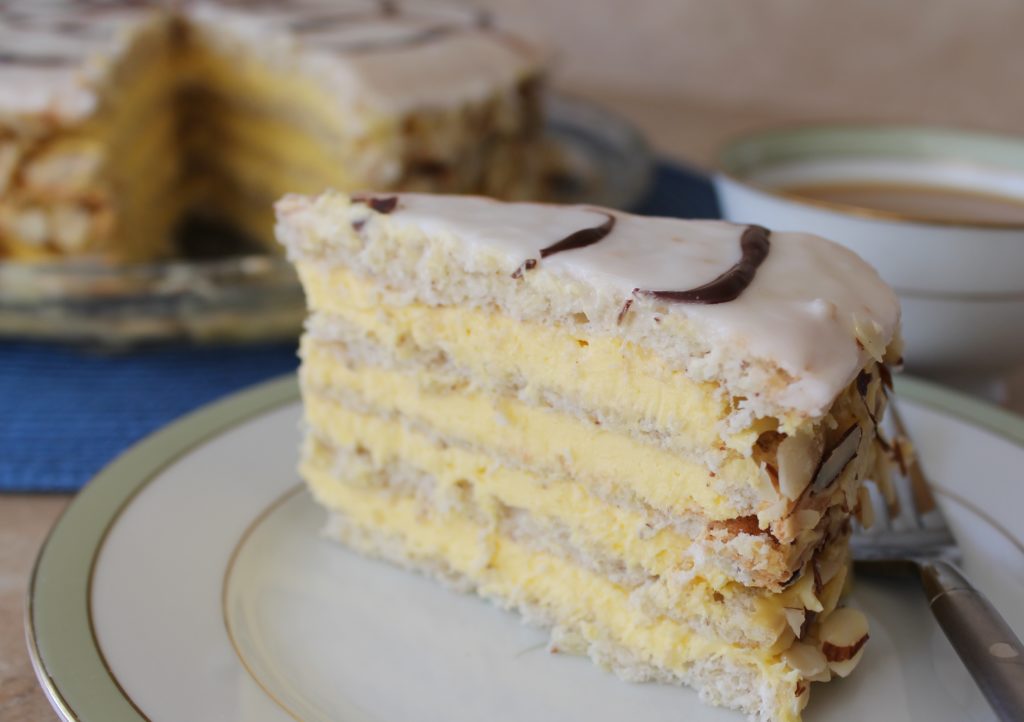 If you're up for a challenge and want to make a beautiful cake for a special occasion, I recommend this one. I also recommend making it once before serving it to friends, unless they're pretty flexible on how the cake looks....

Kudos to Jelena at The Daring Baker's. It was quite the challenge!

Blog-checking Line: For the month of January Jelena from A Kingdom for a Cake invited us to start this year with a dreamy celebration cake. She challenged us to make the Esterhazy cake a.k.a the Hungarian dream. What better way to start the year than with a sweet dream?