Oh, my, oh my oh my are these Creme Brulee Cheesecake Bars good!  Crunchy toffee topping, creamy cheesecake, sugar cookie crust – what’s not to like?

These easy-to-make bars originated at the Betty Crocker web site, but I think my changes in ingredients and instructions make them a little bit better.  It’s hard not to sneak to the refrigerator and grab one! 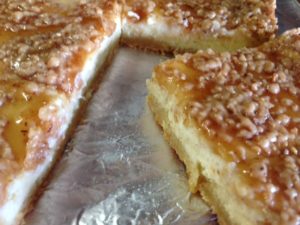 Creamy filling and that carmely crunchy top with a nice base to hold it all.  Incredibly delicious!

These are best eaten the same day you make them.

I scored the bars before putting under the broiler, because the toffee gets crackly and is hard to cut later without destroying the topping.

You can use the entire batch of cookie dough for the crust, but I found it to be too thick if all of it was used.

Mine was done in 30 minutes.

You could use lite sour cream in this also and it would be just as good.

I did find that after being refrigerated overnight, the toffee topping became soft, but was still great!

If you want that great crackling brulee topping, serve it the same day after cooling in the refrigerator three hours or so. 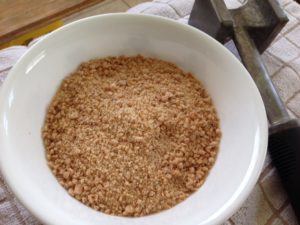