Years ago we had a little Mexican restaurant in town that served the best shrimp enchiladas I’ve ever had.  It may have been all the butter they sauteed them in, but whatever it was, they were perfection!

We’ve been on a quest to find either a good recipe or another restaurant that makes them that well, since the other little restaurant has gone out of business.

This recipe for Shrimp and Spinach Enchiladas with Jalapeno Cream Sauce is different, but just as delicious.  The enchiladas taste decadent without having a bunch of cream and butter in them.  They’re not quite healthy because of all the cheese, but at least I’m getting a green vegetable in there.

I think this has booted the Chicken in Basil Cream as my favorite recipe on the site! 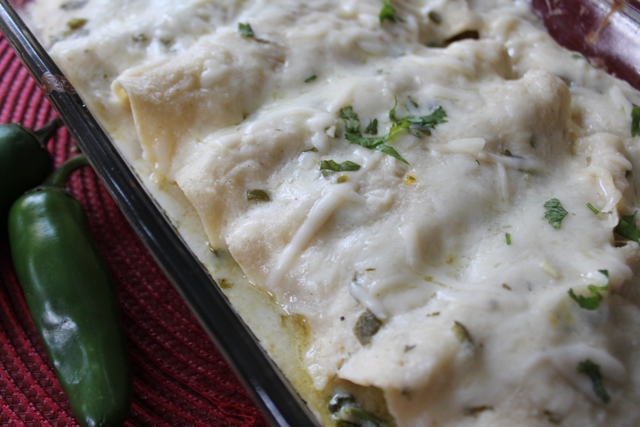 That jalapeno sauce is great – so creamy and rich!  I had gigantic jalapenos (no kidding, look at the photo above), so only used one in the sauce, but make it to your liking.  If you hate cilantro, leave it out.  If you want more kick to the filling, add more cayenne.

These are delicious as-is, but the ingredients can be changed up quite a bit to your family’s liking.  Even substituting chicken for the shrimp would work wonderfully!

You do need to set aside time for prep work (peeling, chopping, etc.).  From peeling the shrimp to taking them out of the oven was a good 1 1/2 hours. (Way worth it, though.) 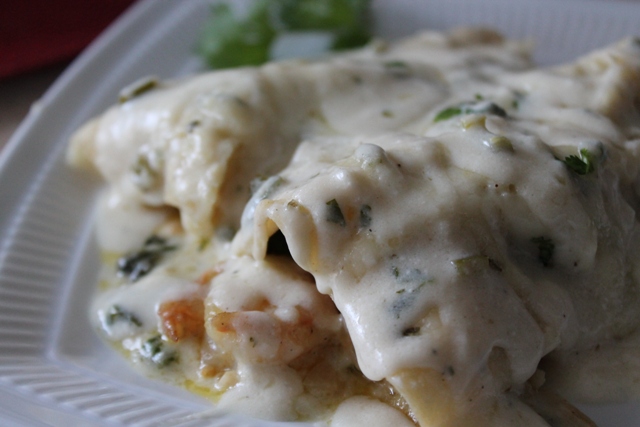 The shrimp filling is wonderful and I loved the addition of spinach. I’ll probably put another three or four cups of it next time (or heck, the whole bag) and make them just spinach enchiladas.

However you make with these creamy, delicious Shrimp and Spinach Enchiladas with Jalapeno Cream Sauce, definitely make them soon!

Read through the recipe carefully before beginning and get ingredients together.  Have shrimp, peppers, cilantro, etc., prepared and ready to add. It really makes the recipe go more smoothly.

I don't usually add sour cream to a boiling mixture, but it works in this one.  Just make sure to whisk briskly to combine after adding it so it won't separate.

After the enchiladas finished baking, I warmed the remaining jalapeno sauce up a little so it wouldn't be cool when poured on top.