It’s been awhile between posts, but I had a good excuse. I went to Alabama to visit my sisters for a week!  While there, we cooked and baked and generally had a great time.

This Seafood Paella by Mr. Food has been tucked back in my “To Try” manila folder for years and years.  Anything I’ve ever tried from the trusty Mr. Food cookbooks has turned out from really good to great and this was no exception. 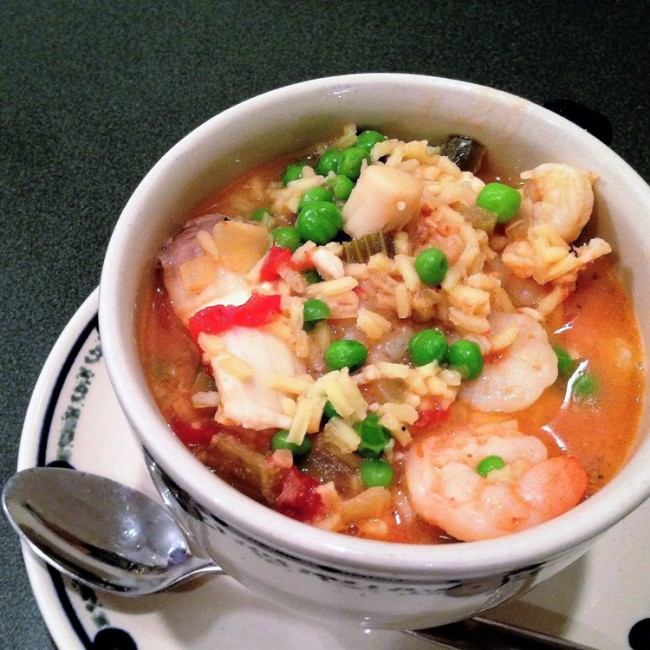 For those of you who aren’t familiar with Mr. Food – about 15 or so years ago I subscribed to the pay-by-the-month, get-a-packet-of-binder recipes from them and they sent a truck load over a couple of years until I finally cut it off.  I ended up with two binders full and have really enjoyed the ones I’ve tried.

We enjoyed this Seafood Paella immensely and it got thumbs up from participating diners. It initially came out more of a seafood soup/stew – I think because of the liquid from some of the frozen shrimp. We also added more seafood (because we wanted to use up the whole bags full) and 12 ounces of peas instead of 10 ounces (because my sister, Sherry, likes peas…).

After it was refrigerated, it thickened up over the next several days and became more paella-like. It warmed up nicely in the microwave – oh, and it makes a TON – more like 10-12 servings than 8.

Only got one good photo with my cell phone, but you get the idea.

Sister Sherry said she would add one more can of drained tomatoes in the future.

Sister Glenda said a tsp. or so of Tabasco after adding the peas would add a nice spicy flavor. If you don't prefer that, have the Tabasco bottle on hand for others to add to their bowls!

I will leave the white fish out completely next time.  The shrimp and scallops were the perfect amount to me, and the white fish didn't do as well as warmed up leftovers.

Don't overcook the seafood, even if the liquid isn't gone out of the Dutch oven - better to have seafood stew than overcooked seafood!

We used regular canned tomatoes and added a tsp. or so of oregano and about 1 tsp. of cumin. I would add more cumin next time. Really very good and I will make this again!