We’re blessed to have 8 pecan trees in our front yard.  Not only are they beautiful leafy trees in the spring, summer and fall, but also every two years or so they give out flavorful Texas pecans.

Bret started with one cutting of a Texas pecan tree from his grandparents’ old homestead and after twenty-five years, they’ve become nice shady trees for us.  Bret doesn’t prefer pecans and shelling them is kind of a pain, so we give grocery bags and sacks to our neighbors and encourage them to come pick up pecans during the fall on the years that they make.

I have lots of good holiday recipes with pecans and instead of hours of shelling, I turn to my father-in-law Rusty (aka, Pa).  Over the last several years he’s picked up thousands of pecans from neighbors up in Weatherford and shells them as kind of a hobby.  He’s got it down to a science and their freezers are full of quart-sized bags of perfectly shelled half pecans that are delicious.  He keeps me stocked up and they always add something special to the recipes. 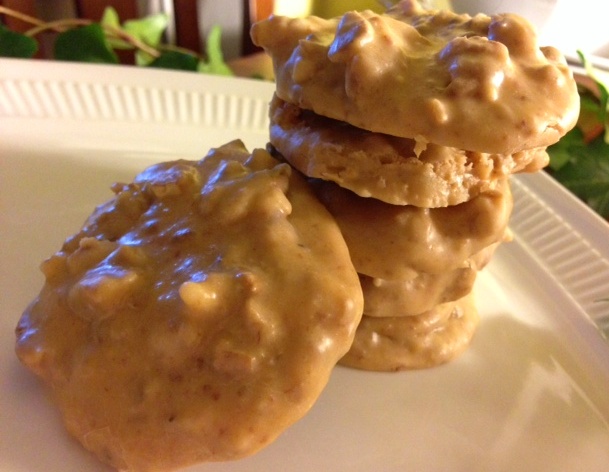 From looking at the original recipe’s picture of this Soft Praline Fudge,  I was expecting more of a shiny fudgy texture, but they came out as a thick, creamy and firm praline.  I prefer this over the sugary crunchy pralines from my childhood – they were too grainy and sugary for me.

I’m very pleased with this recipe and the outcome reminds me of the chewy, creamy pralines you get at your local Mexican restaurant, but better because they were made in my kitchen.

This Soft Praline Fudge would be the perfect ending of a homemade Tex-Mex meal or would go great in gift baskets.  I love the buttery flavor of these!

Next time, I will add pecans after mixture is whipped so I can use my hand mixer to mix it while keeping the pecans nice and chunky.

If you don't have non-stick aluminum foil, use a heavily buttered cookie sheet or platter (these suckers stick if you don't).