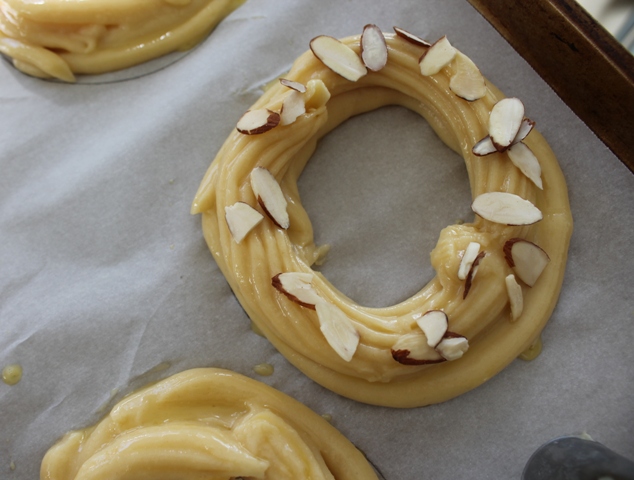 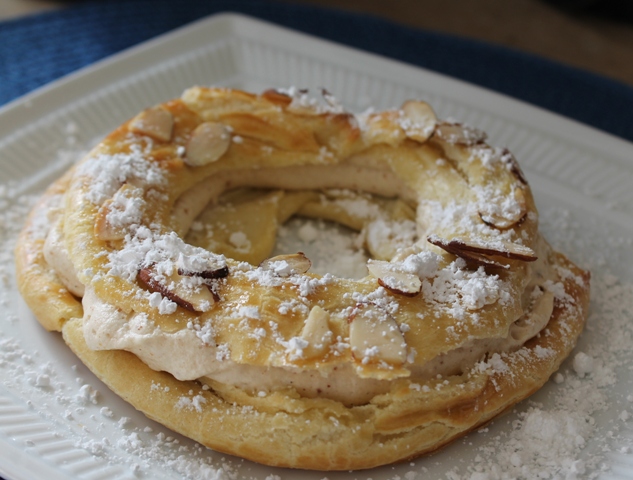 And what a challenge it was!  The October Daring Baker’s challenge was brought to us by Korena of Korena in the Kitchen. She took us to Austria and introduced us to the wonders of the Sachertorte!

The Sachertorte was apparently created in 1832 by a baker named Sacher for some rich prince guy.  If I started practicing in 1832, I might have this cake down by now. It was a great challenge and was going along beautifully until the last step – the chocolate glaze.

But first, creating the cake.  The ingredients aren’t that difficult – mostly things I had in the cabinets already, except for a good quality (I used Ghirardelli) bittersweet chocolate.  My taste test confirmed that it was of good quality…. 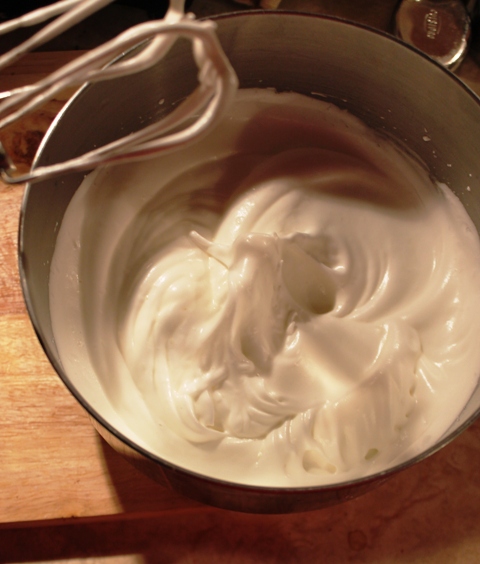 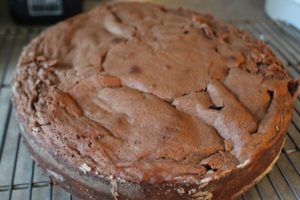 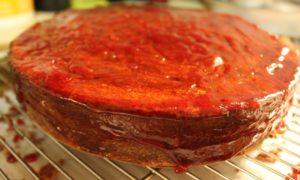 I should’ve quit there, but I didn’t.

Next was the famous sachertorte chocolate glaze. After melting the plastic top to my candy thermometer waiting for the sugar water mixture to come up to temperature (melting plastic – not a pleasant odor), I whisked in the chocolate.

OK, a little thick, so it’s recommended to add a few drops of water to get that thin glazed sheen. After a fourth of a cup of water, drop by drop, I decided it was as good as it was going to get and rushed over to the cake to glaze it before it thickened and clumped. Too late. It instantly clumped and became a thick chocolate (but tasty) mess. I spread it as well as I could, but as a few others on the Daring Baker site described theirs, it ended up being a “rustic” sachertorte.

Hmmm, I was disappointed but undeterred. I proudly wrote “Sacher” on top of the torte because apparently Mr. Sacher was very proud of his creation and this is standard. I am posting a photo even though it is the ugliest cake I’ve ever seen and Herr Sacher is probably turning in his grave, but I spent almost five hours on it, so it deserves to be seen. However, there’s also a delicious slice to look at: 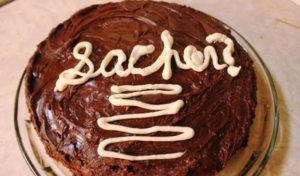 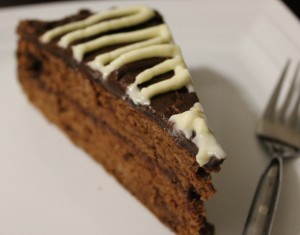 It was great with coffee, but my next encounter with Chef Sacher’s torte will be a visit to the local La Madeleine!  It was fun and I’m glad I did it, but probably will stick with Grandmother’s Cake-in-the-Pan.

Instead of posting the eight-page recipe, I’m going to link you over to the challenger, Korena’s October 27 post. That way you can view the recipe and also see what the torte is supposed to look like.  Thanks for the fun challenge, Korena!