When we make brisket, we have to be very imaginative in creating dishes to use it up.  This Brisket and Bacon hash is a great way to do that.

By the way, the best way to cook brisket is to get the untrimmed brisket, turn the oven to about 250 degrees, plop it in a roasting pan fat side up and let it cook overnight – 8-10 hours, until a big fork slides in and out easily.  No salt, no seasoning – nothing – and it comes out perfect every time!

This time I was determined to do something a little different with the leftover brisket and remembered my Mom occasionally making a hash with diced potatoes and leftover roast beef.  She never showed me how to make it (I was just a kid interested in Barbie dolls and, later, boys), so I set out to figure it out. 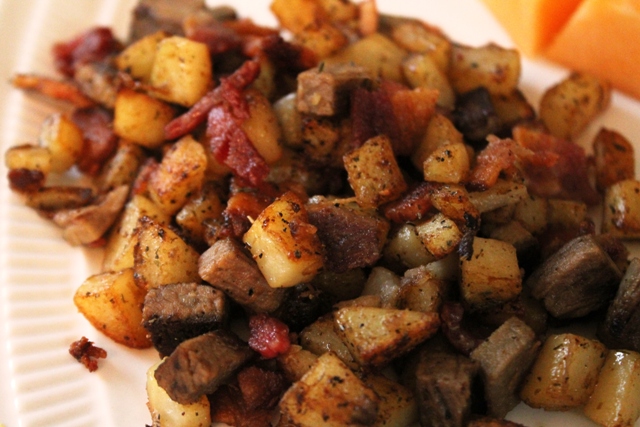 I also had some leftover bacon, so what better to cook the potatoes in than a little bacon fat?  No worry, I drained most of it out.

I like the potatoes and brisket chopped pretty small.  They not only cook better, but have a better texture when finished.

I added a little beef broth to keep the mixture moist, threw in that chopped up bacon and we ended up with a filling, delicious hash!  Comfort food at it’s best.

Bret put a little ketchup on his and it was actually not bad that way.

I don’t like to cover up the bacon flavor, though, so just put a little salt and pepper and enjoyed it immensely.

If you are looking for a quick and flavorful dinner, try this Brisket and Bacon Hash.  I think you’ll like it!

I don't use the onion because Mr. Bret doesn't care for it, but I recommend using it to complete the recipe. Adjust the seasoning to your taste.

If your bacon is salty, ease up on the salt and use garlic powder instead of garlic salt.

I served it with a side of cantaloupe and the combination of sweet and salty is perfect.

You could leave the meat out, use vegetable broth, and it would make a great side dish.