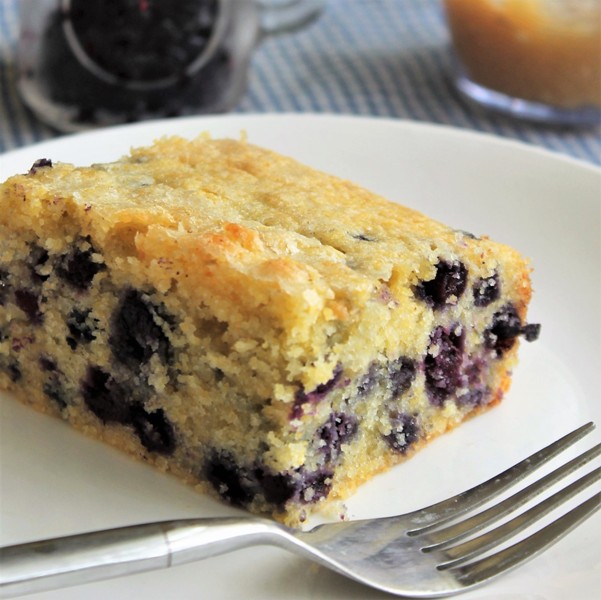 Blueberry Cornbread with Honey Butter. Oh my gosh. The Cook’s Country show on PBS a month or so ago highlighted this recipe and it looked amazing. I wrote down the ingredients and instructions real fast (rewinding quite a few times) and decided to try it when fresh blueberries came out.

Well, I couldn’t wait for fresh blueberries and picked up some frozen Maine blueberries to make this recipe. (If you’re using frozen blueberries, put them in the batter straight from the freezer so they don’t turn your batter purple-gray.) Still under house arrest, er, I mean stay-at-home orders, it’s a perfect time to make this lightly sweet, blueberry-filled cornbread. 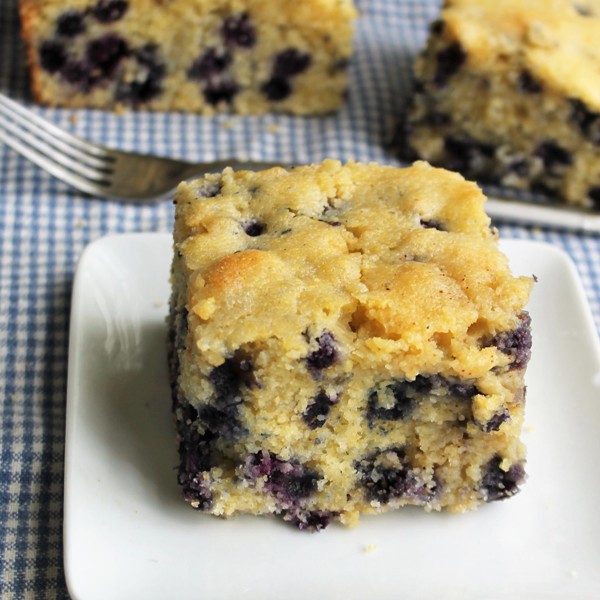 There’s quite a bit of flour in this recipe and Cook’s Country says that’s to make the cornbread a little more cakey and to help keep the blueberries from dropping to the bottom of the pan. It definitely works.

I only used two bowls – one for the dry ingredients and one for the wet. Whisk them together, pour it in the prepared 9-inch pan and bake it for 40 minutes. So easy for such an incredible result.

This Blueberry Cornbread with Honey Butter is bursting with 2 cups of delicious blueberries. The texture of the cornbread is a combination corn mealy/cakey and it rises beautifully. 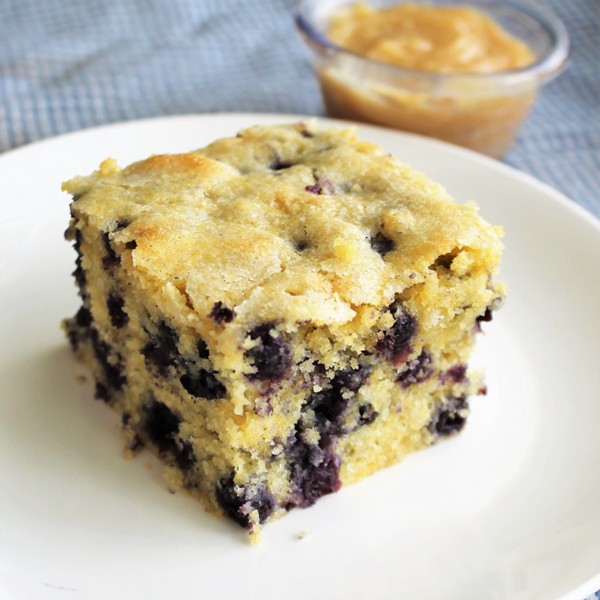 Don’t forget the wonderful honey butter! Softened butter swirled with honey, a touch of salt and a pinch of cayenne. It makes this cornbread almost decadent.

You’ll love this recipe and can have it for breakfast, lunch, dinner, or dessert. It’s really the best cornbread I’ve ever made and I’ll be making it again and again. Baby Girl Honey agrees that it looks very tasty – she’s such a big help while I’m trying to take photos. 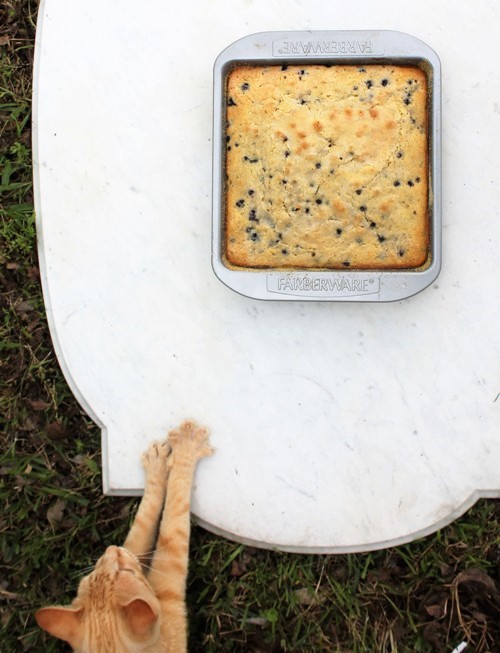 I just realized the original recipe calls for a 9-inch round cake pan and I used a square pan - either one will work.

Don't over mix so the cornbread won't be tough 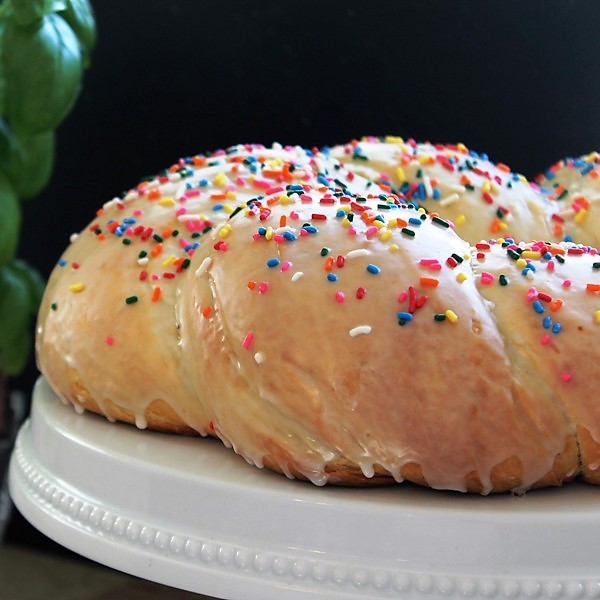 Wow, it’s been awhile since I posted. I’ve made a bunch of new recipes in the past several weeks, but none of them were up to par for posting – good, but not great.

Then along comes this Italian Easter Bread from Brown Eyed Baker. The bread is flavored with orange juice and orange zest, and then I made a few small changes to our tastes.

The original recipe calls for anise oil and I substituted almond flavoring. Also I halved the recipe because we don’t need two big loaves of bread. Although the bread is mighty tasty and now I’m thinking two loaves would be welcome! 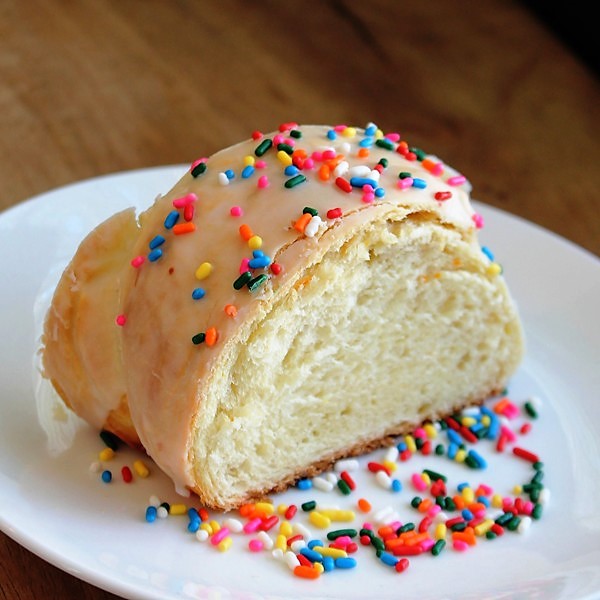 The texture of this Italian Easter Bread is fluffy, fairly soft, and tender. It’s a barely-sweet bread and the simple, sweet glaze goes perfectly as the finishing touch.

There are sprinkles on top because I think they look “Spring-y,” but sliced almonds would be nice if you want an alternative.

The orange flavor isn’t overpowering, but is definitely there and wonderful. The dough is fairly easy to work with and rises nicely to make this beautiful, big loaf. Just take a look! 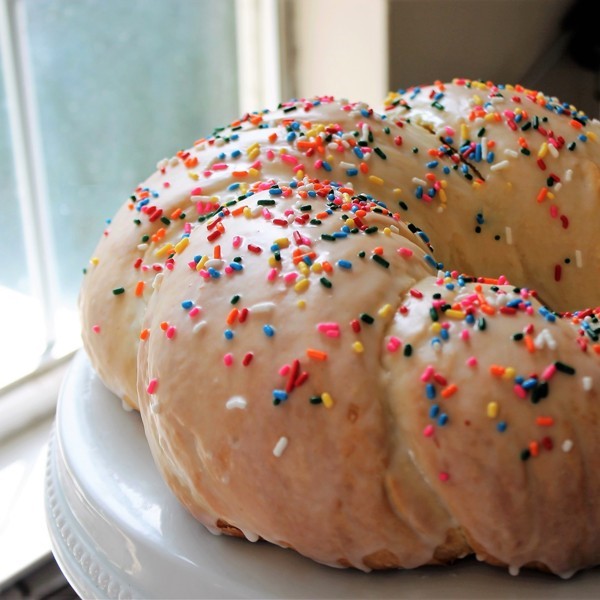 I’m gonna dab a little butter on a slice tomorrow morning and slide it under the broiler for a great breakfast treat. Don’t put it in the toaster, though, or you’ll have a little mess with melted glaze…

This beautiful Italian Easter Bread is great for Easter, but I’m sure I’ll be making it throughout the rest of the year, too.

Besides the time for rising, this bread is fairly straightforward to make and your guests will be very impressed. Put this one on your holiday baking list!

The original recipe was doubled for two loaves and uses anise oil instead of almond extract.

Don't panic if you have to add more than a cup of extra flour after the eggs are added - just add 1/4 cup at a time till it looks like bread dough (will still be slightly sticky though).

Lower the speed of the mixer when you add the eggs or you'll have egg hair.

Make sure the two 24" ropes are even from the middle to the end or after baked you'll have a puffy side and flatter side.  I didn't show my whole bread in the photos, but the ends that were twisted together are smaller than the other side.  Take your time when you twist and pinch them together.

Any lumps or cracks that are in the risen dough will be amplified after baking, so smooth out any rough edges.  (The glaze covers a lot of sins but not all of them!).

Spread a pat of butter on a slice and place under the broiler for a minute to have wonderful breakfast toast. 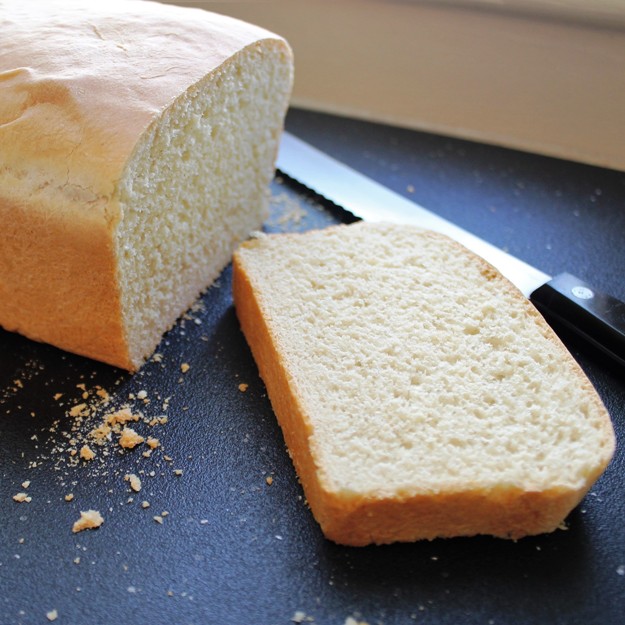 The red and yellow in the title of the recipe supposedly comes from the cayenne and egg yolks that are used, although the bread doesn’t actually end up red or yellow in color at all.

The cayenne gives it just barely a kick, so I’d probably use more next time and maybe some herbs to dress it up a little. It did make a really pretty loaf of bread, though! 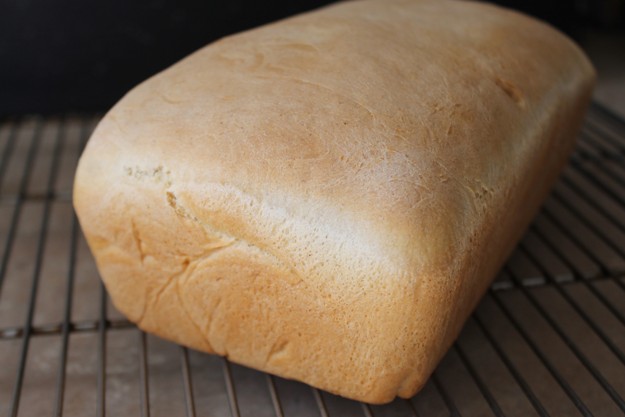 The dough was easy to throw together and was nice to work with. I like this recipe because it only makes one loaf. It seems like most bread recipes make 2 loaves and I really don’t prefer to freeze homemade yeast bread. It just doesn’t seem the same after thawed.

We made grilled cheese sandwiches and this bread gave them a different texture and really soaked up that butter nicely. I did find (like most homemade breads) it’s best the first day or two, then the texture coarsened a bit. I would definitely make this bread again. We both have enjoyed it! 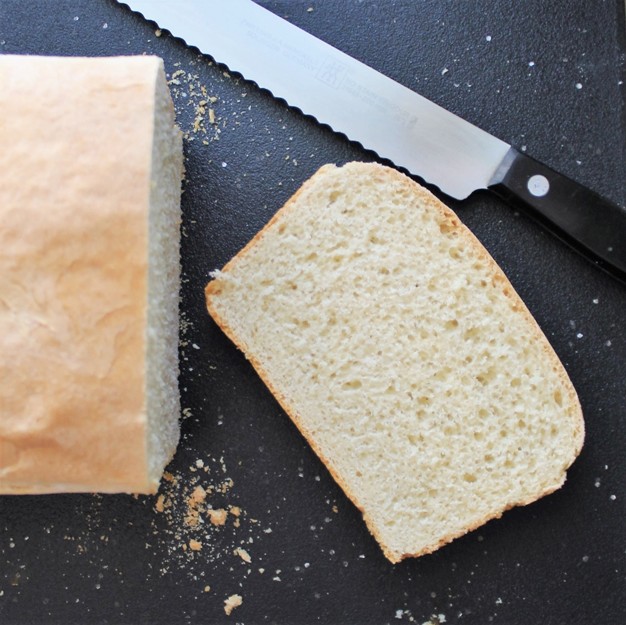 Red-and-Yellow White Bread (is that an oxymoron?) is a good, sturdy bread recipe that is best the first day or two.

Next time I will add another tablespoon of sugar, another quarter teaspoon of cayenne, and possibly some dried herbs.

This makes a crusty loaf with soft interior.  If you want a softer top crust, brush milk over the top of the dough before baking. 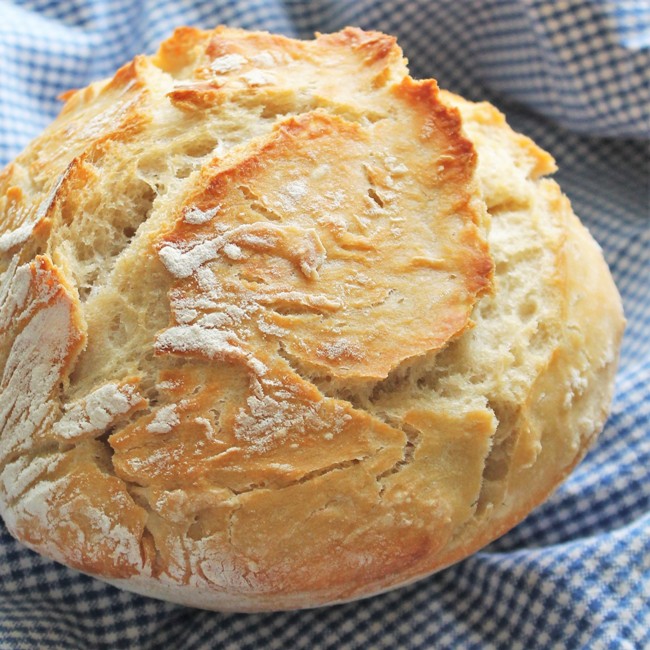 I’ve had this No-Knead Crusty Bread recipe forever and finally decided to make it this weekend.

It’s an interesting recipe because the easy yeast dough is thrown together, then set aside on the counter for 12-18 hours. Glad I didn’t want bread right away!

You’re also supposed to bake it in a 3.5 quart cast iron pot (or dutch oven). After I’d already made the sticky, sticky dough, I realized my dutch oven is 6.5 quarts (I love my dutch oven), so made other baking plans.

I ended up baking the bread in the aluminum bowl that the dough had risen in – and it works! 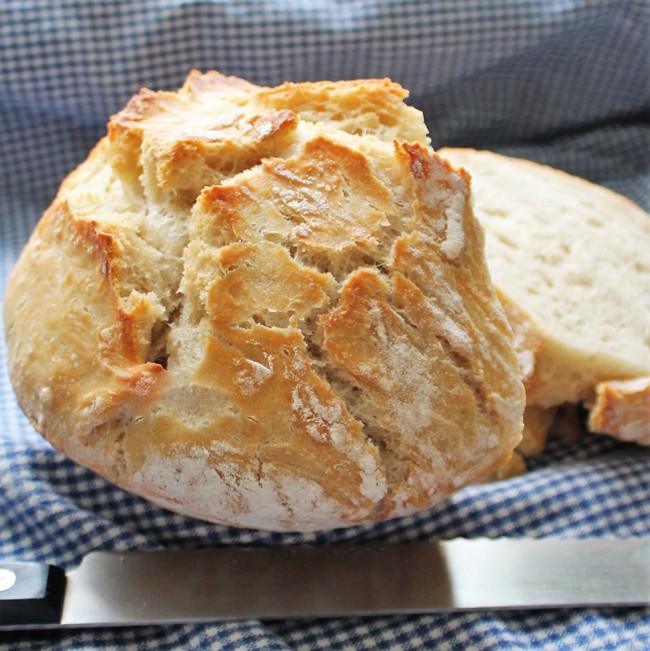 I preheated the bowl in the oven, then dumped the dough into it and followed the rest of the recipe fairly closely.

The baking time was a little different since I was using a different vessel, but it rose nicely and made a crusty loaf with a sourdough-like texture (without the sourdough tang). It’s a dense, but fluffy bread with a wonderfully chewy crust. 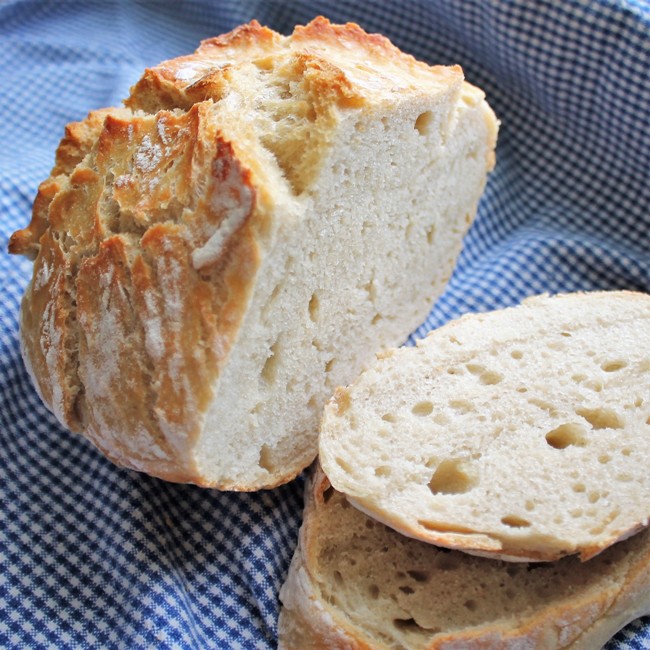 You can bake this Crusty Bread it in a small cast iron pot if you have one, but if you don’t have one, just make it in a big ole aluminum bowl.

Besides the time for the dough to set before baking, it’s an easy, easy recipe and it makes a really delicious loaf of bread!

Don't overwork the dough when stirring it all together or the bread will be tough.  Just make sure everything is incorporated completely.

It doesn't take an entire packet of yeast - just 1/2 tsp., so store the leftover yeast well-sealed in the refrigerator.

For the month of April, Rachael of Pizzarossa and Sawsan of Chef in Disguise (from The Daring Bakers) took us on a trip to Italy. They challenged us to try our hands at making Traditional Focaccia from scratch. I’ve always loved the focaccia at Macaroni Grill restaurant and this one was very close to theirs.

This was my first attempt at focaccia and I think it went well. The dough came together nicely and didn’t end up splattered on the wall when I mixed it, so I considered that a success. Here’s the risen dough – you can see the nice specks of dried herbs scattered throughout: 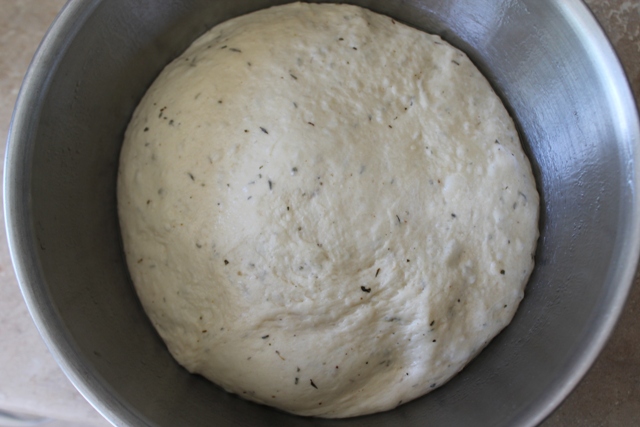 I had to add several tablespoons of extra flour while it was mixing, as it was very sticky and wasn’t coming together into a nice dough ball. After rising, the dough was beautiful and patted out nicely onto the parchment paper. 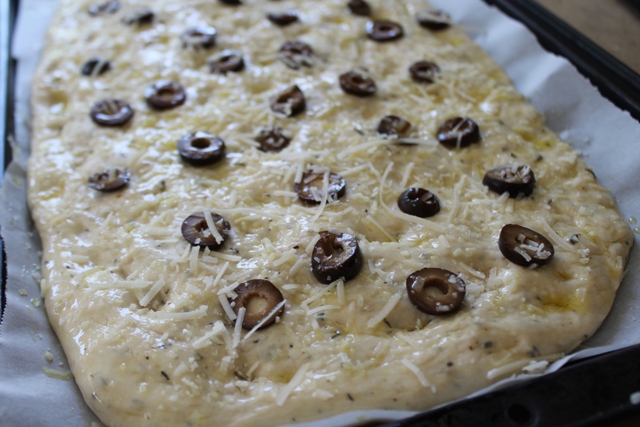 The instructions said to bake at 450 for around 15 minutes and then put under the broiler until it becomes golden brown. Even at 12 minutes, it baked and browned entirely too quickly and didn’t need the broiler.

Maybe it’s my new oven, but next time I’ll turn down the temp to 400 and keep my eye on it. The edges were too dark for our tastes, but as soon as they were cut away, it left a beautiful and very tasty focaccia bread. 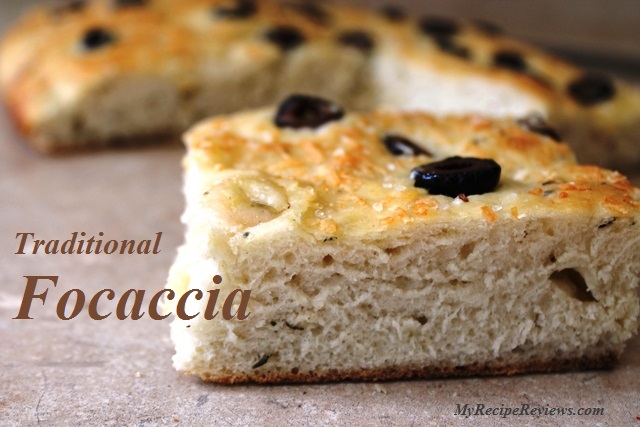 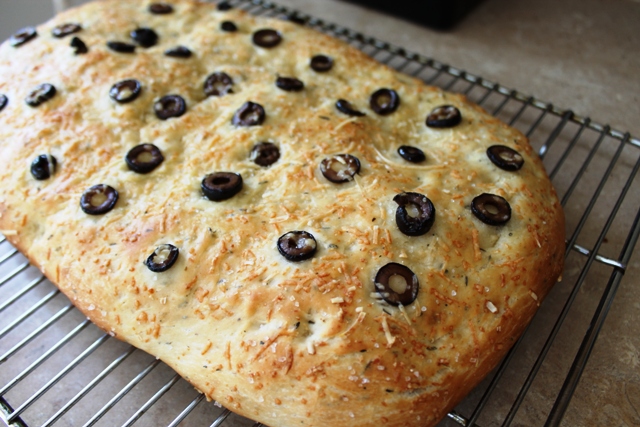